Performance-oriented pattern design for better drainage in wet conditions in combination with the optimized compound to improve wet grip.

Comfortable and easy, whether on long rides or winding roads. Balanced characteristics from the first to the last mile. Featuring TractionSkin, a revolutionary new micro-rough tread surface that virtually puts an end to tire break-in. This is possible due to a new mold coating technology which eliminates the need for tire release agents.

MultiGrip technology makes it possible to use a homogenous grip grading with a single compound thanks to temperature-controlled curing during the production process.

Each review submitted enters you into a
$100 gift card monthly drawing and a
$500 gift card quarterly drawing!
WRITE A REVIEW
Powered by TurnTo
Review More Purchases | My Posts
5.0 / 5.0
1 Review
5 Stars
4 Stars
3 Stars
2 Stars
1 Star
1
0
0
0
0
Value
4.0 / 5
Tread life
5.0 / 5
Wet Traction
5.0 / 5
Grip/Traction
5.0 / 5
Handling
5.0 / 5
Recommend it?
Yes (1)
Value
4 / 5
Tread life
5 / 5
Wet Traction
5 / 5
Grip/Traction
5 / 5
Handling
5 / 5
Recommend it?
Yes
Clear and present fun.
I recently returned home after a 5500 mile journey through Montana, Idaho, Wyoming, Utah, Colorado, New Mexico, Arizona, and California.
From 105 degree "dry" heat to downpours in 40 degree weather, I remain impressed by the even, steadfast performance of the Continental Road Attack 3 tires.
Only when thick tar snakes appeared in higher speed, deeper leaning turns did I ever experience a touch of nervousness. (Tar snakes on the straights, of any thickness, proved uneventful.)
Where the previous EVO 2 model reportedly felt "nervous" at higher speeds, the RA3 was planted and solid at speeds well into the lose-your-license, triple digit speeds, typically reserved for track days--albeit encouraged by wide open desert and long sweeping turns over mountain passes.
The different profiles of the front and rear tire (more rounded front, significantly less so on the rear) had me questioning their compatibility, but this questioning faded quickly when put to the test.
I favorably compare these tires with both the Pirelli Angel GT and the Michelin Pilot Road 4, and would say the RA3 is almost the ideal blend of the Pirellli's sport character, and the Michelin's equanimous, yet responsive character .
The remaining tread after 5500 miles suggests the RA3 may become the longest mileage tire I have yet own.
And unlike both the Pirelli and the Michelin which cupped slightly on the front, the RA3 has worn perfectly evenly.
I like to try different tires, however would not hesitate to repurchase the RA3 when the time comes. . .
Highly recommended. 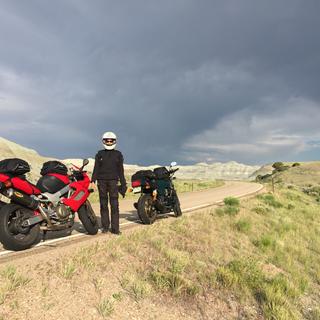 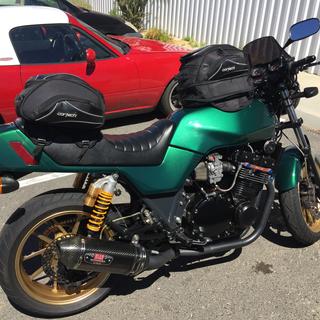 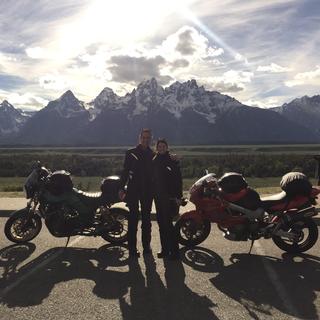