People who have viewed this item have also viewedSee all Helmets

Introducing the all new ATR-2; the next level in brain protection. The 6D ATR-2 is the most advanced energy management device ever manufactured for off-road motorcycle competition or recreational riding. Infused with the exceptional DNA of the original ODS technology, but evolved to a whole new level with high-tech materials and design influenced by 6D's work inside the NFL's Head Health Challenge III competition.

A helmet with in a helmet, the ATR-2 with advanced ODS is evolved to provide improved performance in both linear and angular acceleration mitigation, and is also easily rebuildable for a potentially longer service life. This improves rider safety and saves the consumer money.

Fit: I always wear a large in helmets. I measured my head 100 times, and the recomended size was a medium. I bought a medium and it fits. It is a bit snug, but it should be. I expect after it breaks in it will be perfect. I think a lot of people buy helmets too large because they don't take break-in into account and end up with a less than optimal fit. Measure your dome, and buy the size 6D recommends. I myself was a bit concerned with the fit and had originally pre-ordered from a competitor, but canceled that order and made a new pre-order with RMATV because of the exchange policy.

Cons:
Compared to the Leatt, which is known for its compact construction) it is pretty large. I know they have made the ATR-2 smaller than the ATR-1, but it's still larger than what I am used to. Probably not as much of a difference compared to Arai, Bell, TLD and Shoei.

Someone else had mentioned that their ears get bent in the liner all the time. Mine did too, but I adjusted the comfort liner a bit and it solved the issue. The issue is completely gone of course if I wear a skull cap which I do most of the time. Putting this in the cons side, but it really isn't one.

Pros:
Build quality on this helmet is phenomenal. I can tell that close attention to detail was paid in the construction of the helmet.
Safety, well I haven't tested it yet, and hopefully I never do, but the data speaks for itself.
Comes with an awesome helmet bag. Not just a cheap sinch sack like most helmets. This comes with a very nice lined carrying bag.
The unboxing experience was quite nice. From taking the helmet out of the bag, to the nicely placed extra visor screws and tool and documentation. Everything screams quality.

Overall, great helmet. All things considered, at $700 its a heck of deal. 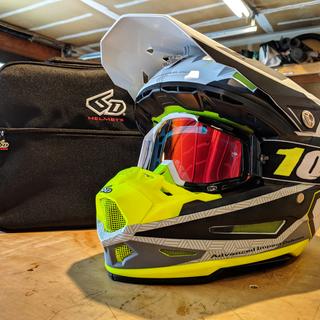 The ATR-2 is certified to the European ECE 22-05 standard as well as DOT. Please let me know if you have any further questions.

The ATR-2 is certified to the European ECE 22-05 standard as well as DOT. Please let me know if you have any further questions.