People who have viewed this item have also viewedSee all Lighting

How To - Install A Tusk Enduro Lighting Kit

How To - Install A Tusk Enduro Lighting Kit

The Tusk Motorcycle Enduro Lighting Kit is designed to be a simple way to provide front and rear turn signals, tail/brake lights, horn, and rearview mirror for your motorcycle. The Tusk Motorcycle Enduro Lighting Kit is easy to install and does not require cutting into or messing with your motorcycle’s existing wiring. The components have universal applications and will work on almost any motorcycle with minor modifications. The kit is intended for motorcycles with existing headlights. 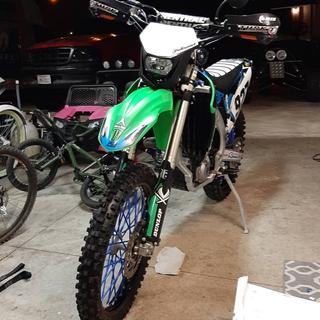 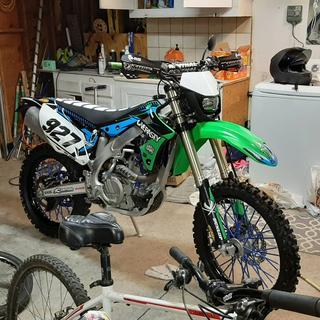 September 13, 2019
Chris J
Menifee, CA, US
Purchased
5 months ago
Recommend it?
Yes
Not painful to install. You will need to get a bigger stater if you are installing on a 2017 Honda crf 450x
August 9, 2019
Lee S
Royse City, TX, US
Age: 25-44
Purchased
1 year ago
Gender:
Male
Value
5 / 5
Durability
5 / 5
Ease of Installation
5 / 5
Fitment
5 / 5
Visibility
5 / 5
Recommend it?
Yes
Great Kit
Super easy to install, all quality products. I would definetely recommend.
July 10, 2019
kirk n
Morro Bay, CA, US
Purchased
8 months ago
Value
4 / 5
Durability
4 / 5
Ease of Installation
2 / 5
Fitment
4 / 5
Visibility
4 / 5
Recommend it?
Yes
Passed the inspection and got my plates. My CRF 450X is now dual sport. I am very happy.
Good kit overall. Most of the installation was very straightforward and easy. My lighting was more complex on my CRF450X, but I just bypassed it straight to the battery. OK quality. Reasonable price. Compared to buying all things separately. Overall I am happy with the kit. I passed my inspection for on road and off-road and I’m happy.

I am far from an expert when it comes to working on bikes.

There are other kits out there that cost a lot more. This is a great kit if you're looking to get your bike street legal. 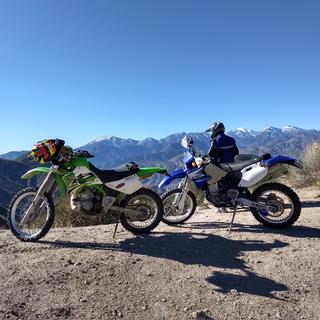 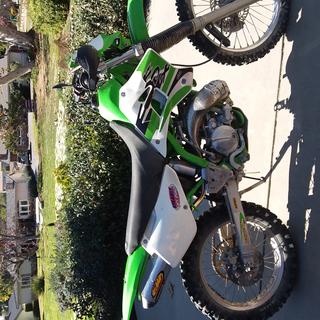 -m-2001 SUZUKI DR-Z 400E--
November 24, 2018
Monte H
winnemucca, NV, US
Age: 45-64
Purchased
over 2 years ago
Gender:
Male
Weight:
251 - 280 lbs.
Height:
5'10 - 6'0
Value
5 / 5
Durability
4 / 5
Ease of Installation
5 / 5
Fitment
5 / 5
Visibility
5 / 5
Recommend it?
Yes
Everything fit well looks good can’t wait to get it on the road
Trying to street legal a wr250f using the tusk lighting kit make sur you think about what your doing with the wire harness . Used more zip ties than the kit provided , hiding all the wires behind the head light is tricky. Everything was marked very well not a mechanic but watch the video on line it walks you right through it finished product look great . Now the hard part all the paper work with the state. 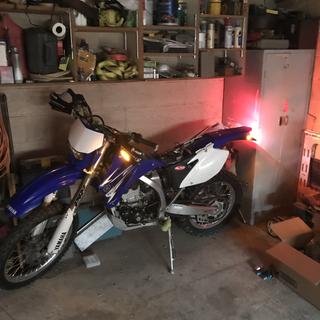 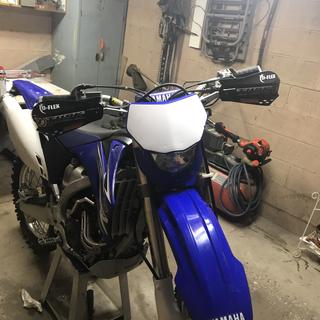 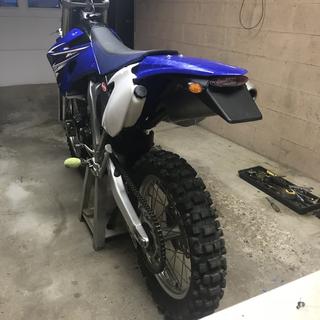 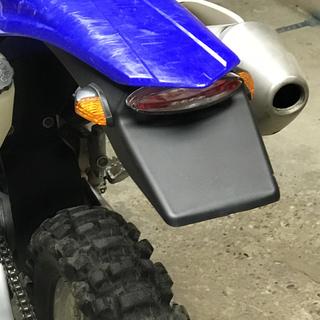 I do feel this kit is way over priced. Really all you get out of it is; Wiring harness, Blinkers, Tail light, & Control switch. All of which feel kind of cheap to me. The blinkers are pretty good, But the tail light housing is open at the bottom, instead of the wires, coming directly, from the tail light and blinkers being tucked up, and allows water and dirt from your back wheel to cake it all up all the time.
The control switch is pretty light and cheap and doesnt grab the handle bars very well and honestly could have included more buttons, such as having the ON/OFF switch on it, as well, instead of having to make room for both. I have to have the control switch, ON/OFF switch, a kill switch, and starter switch taking up a lot of space and is kind of cluttered on my handle bars. & The mirror is pretty useless.

By the time you finish installing everything you say to yourself "That's it? I paid $200 and that's all I put on the bike, really?" and again all the "items" feel fairly cheap and light. So for what you get I feel that closer to a $100 value would have been fair not worth near $200. Especially not even including a head light, or even 2 mirrors, even though they aren't very good, at least you could say you have both.
September 26, 2018
Nick P
Cleveland , OH, US
Purchased
1 year ago
Value
4 / 5
Durability
4 / 5
Ease of Installation
4 / 5
Fitment
5 / 5
Visibility
3 / 5
Recommend it?
Yes
Enduro lighting kit
This is the second bike I have put one of these on, it is easy to install and works great.

-m-2007 YAMAHA WR250F--
June 20, 2018
Brad T
St helen, MI, US
Age: 45-64
Purchased
1 year ago
Gender:
Male
Weight:
131 - 160 lbs.
Height:
5'7 - 5'9
Value
5 / 5
Durability
4 / 5
Ease of Installation
4 / 5
Fitment
5 / 5
Visibility
4 / 5
Recommend it?
Yes
Best value on a lighting kit out there!
I have had this lighting kit on my bike for several years now and am just starting to have some issues. I ride hard and have been through multiple crashes and this kit is really durable. I love the way the signals are tucked away and almost impossible to damage. I just bought a replacement wiring harness for mine so I can rewire it and get everything working again.

P.S. Throw away the mirror if you care about actually seeing behind you. 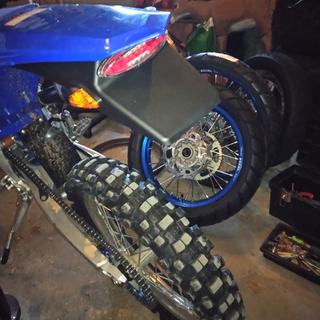 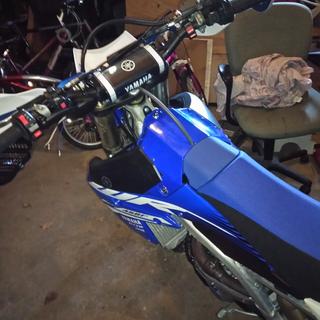 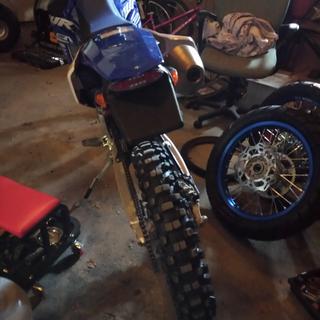 I am a professional Auto tech and found this kit could use some tweaking in my application.

I'll run down what I did that worked for ME.
I omitted the direct battery hook up and spliced to the existing tail lamp harness so the extra junk would not be hooked to the battery and lights would only power up with push switch.
I got rid of the kill and starter switches by wiring those into a combined unit from Sicass racing. This switch also frees up bar space.
I took the front of the harness apart and clipped off the front brake switch wires, shortened most of the wires and looped the battery power wire together as part of getting rid of the supplied Tusk on/off switch. Use the connector from the stock rear tail light harness on the headlight to run all the wires for low/high beam to maintain a weather pack sealed connection.

Kinda short description here, but Google is your friend on this one.

ive had this on my bike for about 40 hours and after many power washings, tip overs and general abuse, all the components are still functioning. 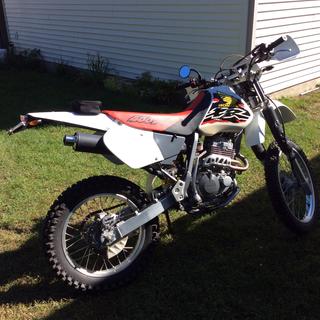 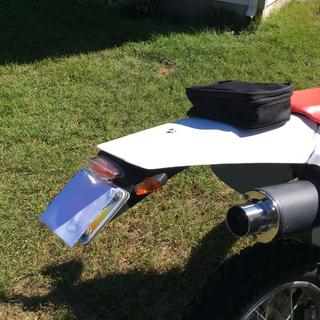 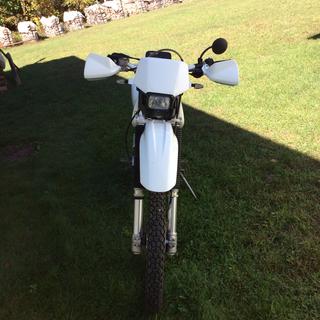 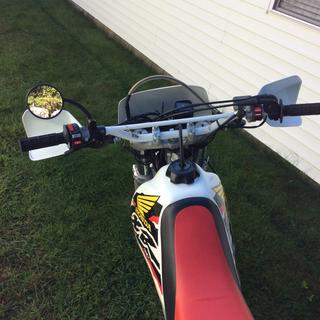 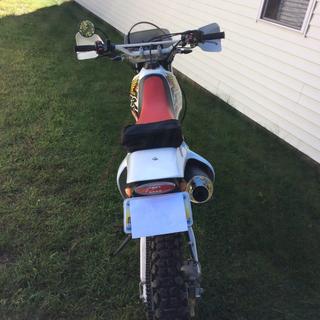 -m-2015 YAMAHA WR250F--
July 27, 2017
Josh D
Oklahoma City, OK, US
Age: 25-44
Purchased
over 2 years ago
Gender:
Male
Weight:
191 - 220 lbs.
Height:
6'1 - 6'3
Value
4 / 5
Durability
4 / 5
Ease of Installation
5 / 5
Fitment
5 / 5
Visibility
4 / 5
Recommend it?
Yes
Street legal greatness
Everything fit great on my 2005 Yamaha WR250F. No problem getting it inspected and licensed for the road. Will definitely buy another kit for my kids bike. The only down side is you need to fabricate brackets or drill into the plastic to mount the blinkers. I already had a tail light; but I like the extra fender length, LED Tail light, and the spot for a plate. So I cut down the fender in the kit and mounted it under the existing fender.

Easy to install and directions were pretty straightforward.
May 30, 2017
Cj A
grand forks, ND, US
Purchased
over 2 years ago
Value
5 / 5
Durability
4 / 5
Ease of Installation
4 / 5
Fitment
4 / 5
Visibility
5 / 5
Recommend it?
Yes
Tusk Enduro kit gets the job done at a reasonable price.
I installed the kit on my XR650r it works fine. The reason I did not go 5 stars was that the wiring is supposed to be bike specific but is more generic.The harness is too long and requires you to bundle excess wiring. The license plate holder is too small for any plate and if you do mount the plate there it becomes a leg slicer if/when you come off the back. But the kit gave me enough stuff to work with to make it work, be functional and looks good. You will have to use the supplied charger and plug it into 110vac from time to time to charge the lithium battery as it will not work with a stock Xr650r system, I already had a charging system and a nickel metal hydride battery installed with the correct rectifier so I was fine. Charging the supplied battery could become a pain.

-m-2002 HONDA XR650R--
May 22, 2017
Gordon T
Benicia, CA, US
Age: 65+
Purchased
over 2 years ago
Gender:
Male
Weight:
161 - 190 lbs.
Height:
5'10 - 6'0
Value
2 / 5
Durability
3 / 5
Ease of Installation
1 / 5
Fitment
1 / 5
Visibility
3 / 5
You get what you pay for.
I know this is a universal lighting kit that may require some modifications to make it fit but I had nothing but trouble installing it. The first thing was a defective brake light that took a lot of troubleshooting to figure out that it wasn't the wiring harness or the pressure switch for the brakes RMATV/MC sent a replacement that required a complete disassembly and re-routing of the wires for the tail/brake light assembly. Secondly I found that the wiring harness was defective for the headlight due to no power to the control switch for the headlight. The horn and signal light switches worked fine but troubleshooting the problem required disassembly of the control switch. Thirdly this kit is completely incompatible with the Trail Tech X2 dual sport headlight and in order to make it work properly I had to make my own adapter by cutting the plug off the switch that came with Trail Tech headlight soldering in a power lead to the control switch and soldering a ground lead into the Tusk wiring harness. RMATV/MC made good on the defective wiring harness but definitely not a simple plug and play installation.
May 18, 2017
Brent A
Pocatello , ID, US
Age: 45-64
Purchased
over 2 years ago
Gender:
Male

Having said that, I would recommend using the LED tail light in the kit, as it uses minimal wattage.
1
BEST ANSWER: For both questions..... If your bike comes with a dual filament bulb in the headlight and tail light, it will work. You will probably have to splice in somewhere to get it to work with the stock rear tail light.

Having said that, I would recommend using the LED tail light in the kit, as it uses minimal wattage.
0
Yes and no. Tail lights that don't have dual stage lighting won't be able to give a dual brightness. Same applys to the front headlight. I went with an aftermarket DOT light such as trail tech although many other off-road lights with have 2 stage wiring that will allow to to plug and play to this setup.
I wa able to get everything wired in a matter of hours. An easy trick is to remove your stock twilight and simply apply the brake light setup with epoxy or carpet tape. I had plenty of off-road and super Moto adventures with it never falling off.
0
1) You will want to make sure to use the hydraulic brake switch to make the rear brake light, but you also need a dual filament bulb.
2) It will work with as a high/low beam, but you must use a dual filament bulb and hook up the wiring harness correctly.

Tusk Hydraulic Brake Switch Brembo Brakes
0
BEST ANSWER: Everyone I know including myself use a rear brake switch on the the front brake. Its the same thread as the rear. You might have to move your break leaver up or down to make it fit correct but it works just fine.