The MX887IT is an ideal intermediate to hard terrain tire with its rigid 4-ply carcass design that helps reduce sidewall flex for a more planted feel.

Note: I tried the 80/100-21 front version. What a piece of crap! It was tiny, offered little absorption, deflecting off everything, and handled horribly.

-m-2012 HONDA CRF250R--
February 9, 2018
Tim B
Galveston , TX, US
Age: 25-44
Purchased
over 2 years ago
Gender:
Male
Value
1 / 5
Tread life
1 / 5
Grip/Traction
1 / 5
Handling
1 / 5
Recommend it?
Yes
Buy a name brand, you’ll be glad you did!
Do yourself an enormous favor and don’t buy this tire. When other reviewers claim the tire is nearly impossible to mount they aren’t exaggerating!! I never could get it on the rim. I took it to a local tire shop and had to leave it with them because they were struggling with it also. Unless it out grips and far outlasts the name brands it is not worth the savings!!! 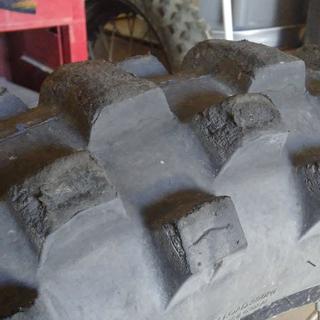 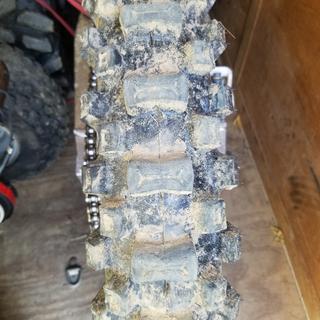 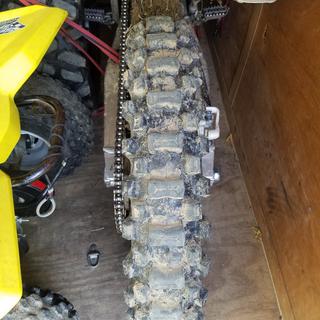 80/100-21 with Tubliss, it is near impossible to get this on the rim, by spoons and a milk crate. I have no problem with most other tires, this one is incredibly stiff and with Tubliss makes it impossible to squish into the the small part of the rim, you must be very resourceful or have a tire machine. I hope the performance and durability are worth it, I don't think I would ever purchase this tire again no matter how well it performs.

works well for most types of riding, but may be a little too squirrely and fast wearing for racers or really competitive riders
February 27, 2017
daniel m
provo, UT, US
Age: 25-44
Purchased
over 3 years ago
Gender:
Male
Weight:
191 - 220 lbs.
Height:
5'10 - 6'0
Value
3 / 5
Tread life
3 / 5
Grip/Traction
4 / 5
Handling
4 / 5
Recommend it?
Yes
I like the versitility of the tires, but mounting them was a pain.
The tread design is great. Does well in the mud as well as the hard pack dirt. The only issue was mounting them. The sidewalls are so stiff that I had to use a heat gun to loosen them up. Another issue is inflating them to seat on the wheel. I had to inflate the tire to 50psi before they would seat.

Machine this part was bought for: 2015 HONDA CRF450R
August 11, 2016
Justin
AZ
Cheap but good
I went with this cheap tire not expecting much. I ride in all kinds of terrain. From rocky hills, sand, and mud. I have been very impressed with this tire. It has held up good, and never left me stranded. I will most likely get another one in the future.

Machine this part was bought for: 1979 YAMAHA YZ250
March 23, 2016
Bradley
Lanse, PA, US
Sedona MX887IT Intermediate/Hard Terrain Tire
This tire is so nice, well built and it is also cheap!!! My friend bought the mx52 tire and it did not last as long or grip like the Sedona MX887IT did!!!

Machine this part was bought for: 2005 YAMAHA YZ450
March 11, 2016
thomas w
OR
Great tire and a great price
This is a great tire and the price couldn't be much better. Works great on the hard dirt of AZ. Shipped fast. I couldn't be happier with it.

Machine this part was bought for: 2006 HONDA CRF250R
March 2, 2016
Ben
AZ
Almost impossible to mount with tire irons at home
These tires are sold at a great price. Lug pattern seems to be pretty dang aggressive. OMG! These tires are extremely difficult to mount on rims. The rubber is so stiff, even when the rubber is warmed up. The carcass is very difficult to work with. Ill never mount a set of these again. Save yourself from stress and bleeding knuckles. Take these tires and your wheels to a shop for install. I can mount Bridgestone or Dunlop tires in 30min. These Sedona tires took me 2 hrs.
January 24, 2016
Christopher B
Rio Rancho, NM, US
Age: 25-44
Gender:
Male
Weight:
131 - 160 lbs.
Height:
5'10 - 6'0
Good tire for the money
Good for what it advertises on intermediate & hard terrian like trails & hard pack. Does Ok in softer dirt.

Machine this part was bought for: 2007 HONDA CRF250R
January 11, 2016
Randall W
Summerville, SC, US
Age: 45-64
Gender:
Male
Weight:
191 - 220 lbs.
Height:
5'10 - 6'0
Cheap and good unless in mud.
I got this tire because of its price. I mostly ride sand and mud and a little bit of rocky terrain. The tire hooks up great in sand when it gets rocky it also impressed me but it simply doesn't hook up at all in the mud. I tried the tire with multiple different psi's and it got a little better around 8-12 in mud. I wouldn't recommend this to anyone who rides in a lot of mud.

All Sedona, All Sedona Tires, All Tires