How To Change a Dirt Bike Tire

The tread of the TRACTIONATOR RallZ Tire is designed to self-protect for long milage and superior off road cornering. 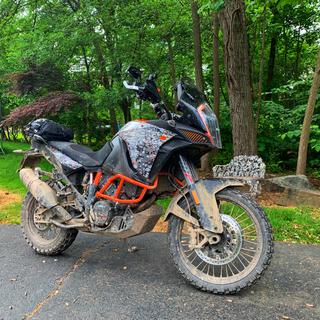 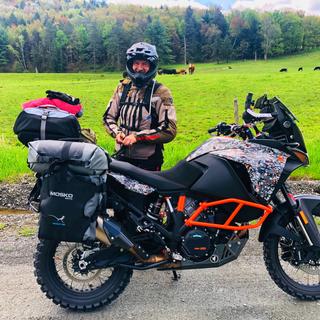 When the tires were new, they had a pretty aggressive speed wobble at anything over 75 mph. As they wore in, this started to disappear, but the noise they make on the highway is louder than any other tire I've run.

My front tire cupped out and was completely toast after about 2600 miles. The sets of two center knobs were completely gone while the sets of one knob were still mostly intact. This caused heavy vibration since the tire had a very uneven rolling profile. I had Motoz change the tire themselves at Touratech Rally West and they were not at all surprised.

The rear tire held up much better and still had tread left after 3000 miles, but not much. I changed it out at that point.

The tires handled well everywhere from pavement to dirt, mud, sand, and rock. They don't have an uneven tip in on pavement at all - very linear.

I made the mistake of thinking these would be at least somewhat street biased since they are a close cousin to the Motoz Adventure tire. They're pretty much a full knobby experience for an ADV bike. I would only recommend these tires if you plan on riding very little street, as they are not comfortable to ride on for long stretches on pavement due to noise and vibration and will wear out very quickly doing so.

-m-2017 KTM 1090 Adventure R--
June 25, 2019
Randall M
Sherhood, OR, US
Age: 45-64
Purchased
7 months ago
Gender:
Male
Weight:
191 - 220 lbs.
Height:
5'10 - 6'0
Value
5 / 5
Tread life
5 / 5
Grip/Traction
5 / 5
Handling
5 / 5
Recommend it?
Yes
2000+ Miles all pavement so far
Since purchasing a set of these Motoz Rallyz tires I’ve put 2000+ miles on them with little to no visible wearing. I was hoping to get some off-road miles on these while in the desert but this is all pavement. When they were first mounted I could definitely feel the difference from the TKC80’s that came stock on the bike. Their is some additional road noise but nothing that’s loud in my book. At highway speeds it will get drowned out and you won’t even hear it. While breaking hard at stops I once again felt that I was on an aggressive knobby, with that said I never felt that I didn’t have control of the bike. Traveling in twisty road I felt confident to open up the throttle and lean the bike into the turns, the grip is absolutely amazing, I was hitting speeds much faster than I did on stock tires. The few times I was able to get into some sand along the Snake River in Idaho, I would come to a complete stop and just launch it as hard as I could, these things didn’t spin, they locked into the dirt and I was moving. All and all I’d say Motoz is doing it right with their compound I am and will be a loyal customer to this brand. If I was going to do another long trip with mostly pavement I might swap out the rear for the Tractionator GPS but keep the Rallyz on the front. These tires are awesome!!!

All Motoz, All Motoz Tires, All Tires